ZOW: Saving in the right area

From February 4th to 6th, things were almost familiar at this year's supplier fair for the furniture industry and interior design - ZOW - in Bad Salzuflen. The 2,600 visitors, who were in the only and not fully used exhibition hall until the evening of the second day of the fair, did not put the exhibitors in euphoria in terms of quantity. Some considered it questionable to participate again. Others praised the quality and depth of the discussions and the fact that there was even some time to talk to the neighbors. A mixed picture. Kölnmesse sees itself largely confirmed in the new concept, which is intended to promote this intensive network focus, and will continue to work on it. In 2020 the fair was not lacking in trend topics what so ever. 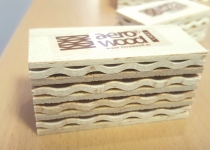 The interest group lightweight construction (IGeL) presented itself in line with the increasing demand for resource-saving and easy-to-move furniture and doors on a large joint booth. Various manufacturers presented their panel developments here, including the Austrian Schweitzer plywood plant, whom's Aerowood is produced entirely from wood (see photo). The Technical University of OWL showed a new development with the Particle Grid Board, which is a light particle board made from two structure half-shells. Also present was Lisocore from Leightweight Solutions from Bad Aibling, whose large cavities are supposed to simplify cable laying. If a WPC cable duct is then attached to the corresponding lightweight desk, every office environmentalist's heart will beat faster. This was found quite new in the range of ZOW exhibitor Oskar Lehmann.

To keep it all together, there was also the Who is Who of the adhesive manufacturer at the IGeL booth, like Henkel and Jowat. In conversation with H. B. Fuller it wood out, that it is important for the industry to realize, sustainability den not be done halfheartedly. This means that the international company provides its customers with the lowest possible VOC levels and los production temperatures in order to save energy.

The Import Promotion Desk (IPD) was also represented at the IGeL stand with light woods from Indonesia. Plywood and blockboards made of fast-growing Albasia wood (Paraserianthes moluccana) were particularly convincing because Albasia has a low density of around 350 kg / m³, but can still keep up with classic materials in terms of screw pull-out resistance and bending strength. However, since the wood is also comparatively soft, there are still problems with industrial coating with melamine decorative films. Here research is currently checking the use of kraft paper as a coatable top layer.

The new, broad range of products from Ukraine also stood in Focus at the desk's own IPD stand. After a year of intensive sourcing, a group of reliable suppliers for parquet, terrace boards, solid wood panels, veneered panels, molded plywood, window scantlings, windows, doors and planed products with FSC certification could be found. Ukrainian forestry is changing. An electronic control system already in place in some regions, which enables the wood to be traced from logging to processing using barcode labels, has now been introduced across the country.

Leimholzprofi.de produces oak panels directly in Ukraine, with purchases being made throughout Europe. A new plant in Romania is used exclusively for the production of the trendy and in demand old wood product line. Full employment also makes it difficult for the Bocholt-based company there, but the situation is still mastered, unlike regions of the country in which the recruitment by other large companies takes place directly in front of the factory gates. Molded wood manufacturer Becker from Brakel is struggling with this. Like apparently all wood and decor suppliers at the fair, they can look forward to good sales. Until now, the business was based on the delivery of the molded wood parts, so the company has recently started offering finished furniture to meet this increasingly louder demand.

When it comes to fittings, it tended to be simple, unobtrusive to invisible. Häfele had, for example, the claw connector that disappeared during assembly. At D-Beschlag, they notice a continued high demand for handles in the color of the front or, better embedded in the door, so that the furniture looks as if it had no piece of metal in it - without having to pass on the simple cleaning of aluminum and stainless steel. The Danish manufacturer Vonsild specializes in wooden handles in various designs made of oak and walnut. Turning parts were also in demand among visitors, as was noted at Aerzener Holztechnik. Apparently these were not in high demand for a long time and could now experience a revival - as there are hardly any providers left.

The special exhibition "Tiny Spaces", which was conceived by "trend filter" Katrin de Louw, dealt with age-appropriate living in limited, urban spaces. A shared apartment in which, among others, a 33-year-old commuter and a 74-year-old pensioner will find their own home, perfectly tailored to their needs, and also use other rooms - such as the three cooking options - together. The individual comfort and space requirements in a small space bring solutions as well as a number of practical storage options with them. The impressive residential community focused on multifunctionality and the possibility of using every square meter as diverse as possible.