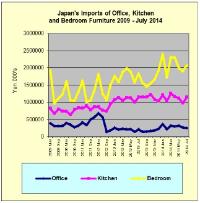 Japan's imports of bedroom furniture increased in July reversing the downward trend for the past two months. Demand for imported kitchen furniture has improved slightly but was capped by the weak housing starts. Imports of office furniture have settled back into the steady and unchanged levels seen before the peak just before the consumption tax increase in April this year.

Japan's July 2014 imports of office furniture were up 17% compared to levels in July 2013. China remains the major supplier (56%) with the bulk of the balance being supplier from the EU, notably Poland, Italy Germany and Portugal.

Year on year Japan's imports of bedroom furniture were 13% up on levels in July 2013 and were also higher than in June this year. China, Vietnam and Thailand dominated bedroom furniture imports in July as they have since the beginning of the year. Other major suppliers include Malaysia, Poland and Romania.